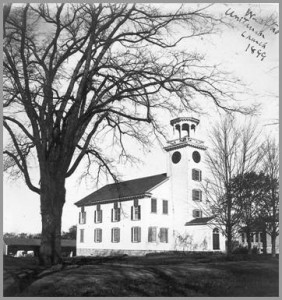 The first church building was moved in 1771 to South Chelmsford for use by the Baptists, and the second building burned in 1793. Our third and present meetinghouse was built in 1794. Originally one large room with a raised pulpit – and a sounding board, a gallery, and box-pews – the building sat broadside to Main street with the tower facing Connell Drive. The original bell was the fourth church bell cast by Paul Revere; our present bell has been in place since 1856.

For over 100 years the church and town were one. The town called the minister. By 1847 the one room had been divided into two floors. Town meetings continued to be held here until 1868. The building was truly the center of all religious, political, and social activity. Even Westford Academy graduation exercises took place here through 1907. 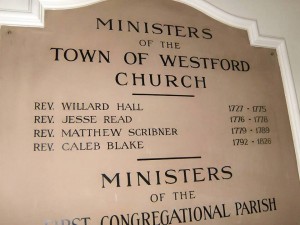 In 1868 the meetinghouse was turned a quarter turn towards the present library, at which time interior remodeling was done. The chandelier in our sanctuary originally held oil lamps and is suspended on a cable with a counterweight so that it could be pulled down when the lamps needed filling or the glass chimneys needed cleaning. In 1916 electric lights replaced the oil lamps in the chandelier. Mr. Abiel Abbot paid for this modern convenience; the Women’s Alliance provided a reception following a service honoring the momentous occasion.

The delicately wrought three-paneled stained glass window in our sanctuary depicts the story of Elizabeth leading her son John “through the path of life.” John later became John the Baptist, because he preached along the banks of the Jordan River where he baptized many, including Jesus, in the waters. 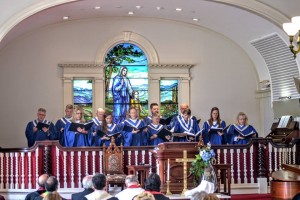 Flanking the life-size figures is a green olive tree and a stream coming down the hills. The side panels show cedars, rocks, and grazing land in the rear. Ionic wooden columns frame the side panels.

Both the artist and the workshop which produced the window are unknown. On December 11, 1910, over 300 people gathered here to dedicate this beautiful window and the rich, hand-carved walnut choir rail, both given by native son Edwin D. Metcalf in memory of his mother Nancy Elizabeth Metcalf.

She was a leader in this community and, with other ladies, made clothing, rolled bandages, and baked for the Northern Troops during the Civil War. Her husband William was the first to enlist from Westford. Edwin, who at the time of his father’s death was a successful New York businessman, was so moved by the turnout of Civil War veterans at the railroad station in Westford that he made a gift of the Civil War Monument on Westford Common. This was in the same year he gave the gift of the stained glass window. 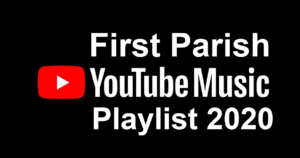